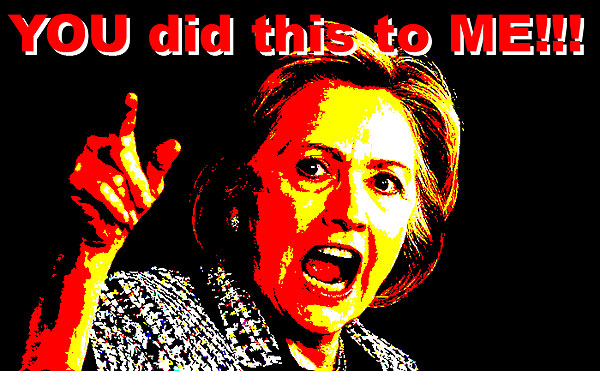 "Never underestimate the power of denial” – Ricky Fitts, from the film, "American Beauty"

Dateline: 6.1.17 – She's back! Yes, Hillary Clinton is hitting the road and fighting back! She's not messing around and she's taking no prisoners! If it wasn't for the fact that she's obviously very serious, this would seem like a Saturday Night Live skit. A few weeks ago when Mrs. Clinton came out of seclusion, the first thing she said was, “I take full responsibility for my loss.” Since that brief moment, her list of who done her wrong has grown to a staggering length and is likely to continue to grow.

On June 1, 2017, in his Fox News morning program, “America's Newsroom” Bill Hemmer put up a graphic documenting 24 of Mrs. Clinton's excuses as to why she lost the 2016 presidential election to President Trump. The list is below with my brief comments in bold red after each one. Remember the Ricky Fitts quote I listed above, "Never underestimate the power of denial"!

Here are the 24 documented reasons given by Mrs. Clinton as to why she lost to President Trump. (my comments in red)

1 – The FBI – The FBI let her off the hook, gave immunity to her friends in return for nothing, and allowed evidence to be destroyed, and finally claimed there was “no intent” (try that excuse the next time you get pulled over for speeding, “But officer, I didn't INTEND to speed.”). I guess that wasn't enough help. Was the FBI supposed to HELP HER?

2 – James Comey – She loved Comey when he gave her and her friends a pass but he was a BAD MAN for opening up the investigation 2 weeks before the election because of official documents on the laptop of the creep husband Anthony Weiner (aka “Carlos Danger”) of her closest aide and confidant, Huma Abedin.

3 – The Russians – Oh, those pesky Ruskies! They mess up everything!

4 – Vladimir Putin – Vlad the Impaler unleashed his KGB dogs on her. Sure!

5 – Anti-American Forces – Gosh! Were our enemies supposed to HELP her? Bet you didn't know that!

6 – Low information voters – Yes, STUPID people and DEPLORABLES too. Nothing like complimenting the American people, Hillary!