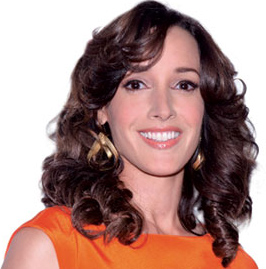 By Allan Richter of Energy Times. Motherhood has put the environment in sharp focus for the “Flashdance” and “L Word” actress.

Beals spoke to us from Washington DC. She was representing a consortium of 450 health, environment and business groups called Safer Chemicals, Healthy Families to lobby Congress for action on environmental toxins in household products.

She shares, "As you get older, you realize you don’t have to accept things just because that’s the way things are. At a certain point it’s up to you to change them."

Jennifer Beals launched a fashion fad when she wore an off-the-shoulder grey sweatshirt in “Flashdance,” a Hollywood image made famous by the iconic movie poster featuring Beals as a Pittsburgh woman with dreams of ballet stardom. Thirty years later, Beals, 49, hopes to be part of a trend in which she has a much more personal stake, and one that has far more vital results: lobbying to rid household products and other manufactured goods of harmful toxins and raising awareness about alternatives.

Beals, who appears in the web series “Lauren,” and who has starred in HBO’s “The L Word” and the film “The Book of Eli,” among other work, first became aware of the environmental issue on the job, as she explains, but became more acutely focused on the environment’s impact on health after her daughter was born in 2005.

As a Hollywood actress, Beals realizes she has the means to “shop my way around” the environmental toxins problem because she has better access to alternative, healthier goods. “This is also an environmental justice issue, which is obviously linked to social justice,” Beals says. “I think it disproportionally affects people who have an economic burden.”

But Beals, who frequently heads outside for six-mile runs, is optimistic. She sees firsthand how being aware about fitness and healthy eating can relatively easily translate to awareness about other consumables and the environ­ment’s impact on them. “People are much more aware of contaminants in food,” the actress says. “As a society we’ve talked a lot about not eating processed food and being mindful of GMOs, and I think it’s a very small leap to applying that to consumer products.”

For Beals, health and wellness are linked to her acting, too. She finds her craft therapeutic. “Anytime you can express yourself it’s helpful to the soul, and whatever form you can find to express yourself is helpful. I love it,” she says. Beals spoke to us from Washington DC, where she was representing a consortium of 450 health, environment and business groups called Safer Chemicals, Healthy Families to lobby Congress for action on environmental toxins in household products.

Energy Times: How did your activism on environmental toxins start?

Jennifer Beals: Even before my daughter was born, when I was working on “The L Word,” one of the other actors on the show came into the makeup-and-hair trailer and said to the rest of the cast, “You know, we really need to use makeup that’s free of [toxins].” None of us knew about that. She started to educate us. At that point we asked the makeup artist to see what she could do to find makeup that was toxin-free. She really had trouble finding a line that could meet the needs of the camera, so she ended up creating her own.

So at first I became aware of the issue through cosmetics. Then my daughter was born, and when you become a new mom that vigilance reaches new heights in terms of wanting to keep your child safe. So I spent time researching which products had toxic chemicals and which didn’t. You look for the mattresses and pajamas that don’t have flame retardants and other toxic products.
People take advantage of this market for babies and children. They have all kinds of creams and conditioners. Now there’s literally a line of fragrance, cologne for newborn babies, which of course is absurd.

ET: What products are on your radar more recently?

JB: I recently was made aware that synthetic [athletic] turf is crumbled up tires. It’s ubiquitous, from daycare centers to pro football fields, but most inappropriately in daycare centers and elementary schools. And it’s toxic. The ground-up tires have all manner of chemicals that are particularly [harmful] in the heat. An EPA study in New Jersey found that the more kids that are playing on the field, the more off-gasses there are, and this stuff is not inert. In 2009, they found an inordinate amount of lead in the [synthetic turf] blades. As the turf starts to get old, it becomes inhalable. There were kids getting lead poisoning in New Jersey.

The synthetic turf industry, to their credit, tried to change the formula for the blades. The problem is you’ve got these crumbled-up tires making up the infill, and you can’t do any quality control with the tires. Something like 30,000 tires make up the field, and you don’t know where these tires are coming from. Because of proprietary laws, tire manufacturers really don’t have to tell you what’s in that tire, anyway. When you start to go down the rabbit hole and start to look at all the toxins that are in our environment and in the products that we use, you wonder how the heck did they get there?

We hear about the FDA, so you assume that the onus will be on manufacturers to prove products are safe and that if they’re not, they’ll be taken off the market. But that’s not the case, so the onus is on someone like me, a consumer, to try to figure out what’s safe and what’s not for my family.

ET: What do you do at home to ensure that you have a safe, toxin-free environment?

JB: I use a lot of vinegar and water as cleaners, and we read the labels. We make sure products are toxin-free. Instead of a commercial lotion that has all kinds of fragrances in it, I usually will buy unscented shea butter. If I want to get snazzy I’ll put a couple of drops of lavender oil in it. That’s about it. I am careful about personal care products, but in my industry it’s tough to avoid it because on set there are all kinds of toxins. I remember when I did “Flashdance,” they used a lot of smoke in the atmosphere on set to establish the look of the film. I would come home and blow my nose, and it would be just jet black. I thought, “That can’t really be good for me,” but I didn’t really think much more about it then. That’s just the way things were. As you get older, you realize you don’t have to accept things just because that’s the way things are. At a certain point it’s up to you to change them.

ET: With your focus on environmental health, I would think you have a pretty healthful diet and fitness routine.

JB: I discovered the triathlon after my daughter was born, and I love open-water long distance swimming. I’ve started to run again. I’ve recently been going on longer and longer runs. I haven’t done a triathlon in a while but that’s what I love. The bike is a bit of my nemesis but I’m trying to learn to love the bike.

And I discovered Brendan Brazier’s diet. He’s one of the few vegan triathletes. He has written a series of books and he has a web series about this way of eating and training. Since I switched over to more of that diet I’m able to recover more easily from longer runs. I also sometimes take fish oil and vitamin D. This is interesting: The other day I went on a 10-mile trail run, and I wasn’t thirsty. Two years ago, had I done that same run, I would have been really thirsty and would have had to carry a lot of water with me. I don’t know what accounts for that, but I wonder if, because I’ve been eating so many more vegetables and drinking so many more juices, maybe the beet juice, my muscles are more hydrated.

ET: Are you a vegan?

JB: I can’t say that I’m completely a vegan but I certainly eat that way more, especially when I’m training. I don’t eat a lot of meat. I don’t eat red meat very often.

ET: In terms of toxic cleaners or home products, what was the toughest finding a healthy alternative for?

JB: It’s funny, we didn’t have that much trouble finding an alternative for cleaning fluids, but it’s a little more challenging shopping for something that usually has flame retardants. Now with the synthetic turf stuff, there are companies that think it’s a good idea to put flame retardant on the whole field and in all the infill, and there are kids playing with this infill because it looks like chocolate chips.

ET: People sometimes take the easier route, even if it’s not the safest one. Are you optimistic that this message will resonate?

JB: When people become educated about these issues they become more active in changing their behaviors. But for some people, because they don’t see it immediately, it’s difficult for them to wrap their mind around. The rise in pediatric cancer rates and the rise in breast cancer rates and the rise in asthma cannot just be genetic because they are rising at such a precipitous rate. We need to do something about it now. If we do something about it now we’ll start to see change. If we don’t, we’re really playing Russian roulette with future generations.