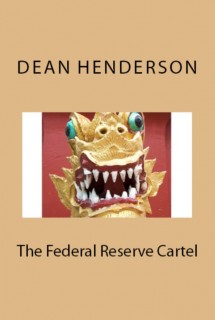 I have just completed and published my fifth book.  The Federal Reserve Cartel is a brief well-documented history of the Eight Families who control the world’s private central banks and most of the planet’s resources.  For those of you who have read Big Oil and their Bankers in the Persian Gulf… ,this new book is essentially Chapter 19: The Eight Families, plus an ending that details a solution.

Here are a few excerpts:

“the control that these banking families exert over the global economy cannot be overstated and is quite intentionally shrouded in secrecy. Their corporate media arm is quick to discredit any information exposing this private central banking cartel as ‘conspiracy theory’. Yet the facts remain.”  The eight families controlling significant portion of world finance according to Henderson are: (1) the Goldman Sachs, (2) Rockefellers, (3) Lehmans and (4) Kuhn Loebs of New York; (5) the Rothschilds of Paris and London; (6) the Warburgs of Hamburg; (7) the Lazards of Paris; and (8) the Israel Moses Seifs of Rome.  “Eustace Mullins [picture, right] came to the same conclusions in his book The Secrets of the Federal Reserve, in which he displays charts connecting the Fed and its member banks to the families of Rothschild, Warburg, Rockefeller and the others,“

“Many considered them traitors working for European old money. Rockefeller’s Standard Oil, Andrew Carnegie’s US Steel and Edward Harriman’s railroads were all financed by banker Jacob Schiff at Kuhn Loeb, who worked closely with the European Rothschilds. Several Western states banned the bankers. Populist preacher William Jennings Bryan was thrice the Democratic nominee for President from 1896 -1908. The central theme of his anti-imperialist campaign was that America was falling into a trap of ‘financial servitude to British capital’.”

“it’s not federal and there are no reserves.”

The Amazon Kindle version is at: http://www.amazon.com/Federal-Reserve-Cartel-Dean-Henderson-ebook/dp/B00ICYL992/ref=sr_1_1?s=digital-text&ie=UTF8&qid=1392233606&sr=1-1&keywords=the+federal+reserve+cartel

For all other e:book and PDF formats go to: https://www.smashwords.com/books/view/407183

Dean Henderson is the author of five books: Big Oil & Their Bankers in the Persian Gulf: Four Horsemen, Eight Families & Their Global Intelligence, Narcotics & Terror Network, The Grateful Unrich: Revolution in 50 Countries, Das Kartell der Federal Reserve, Stickin’ it to the Matrix & The Federal Reserve Cartel.  You can subscribe free to his weekly Left Hook column @ www.deanhenderson.wordpress.com. Dean is a regular guest on FarOutRadio and is a featured columnist.