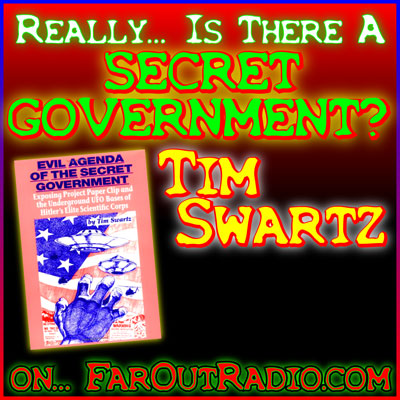 Listen HR 1 HERE.  HR 2 HERE. Our friend Tim Swartz is back with us this program and we continue our conversation about the alleged “secret government.” Tim is a researcher and Emmy-Award winning television producer/videographer and has been tuned into this issue for nearly 20 years.In 1999 Tim wrote the book, “Evil Agenda of the Secret Government” available in paperback and Kindle on Amazon, HERE. The subject of secret governments, shadow governments, and hidden agendas is complex and has a history that goes back thousands of years.

Sorting it all out, connecting the dots, and making sense of it all is not an easy or simple task.

While much has happened in the 14 years since the book’s publication, the background information is still in tact.

The Merriam-Webster Dictionary defines the word, “Conspiracy” as; the act of conspiring together and an agreement among conspirators.” Therefore, “technically” speaking, a surprise birthday party is a conspiracy. The dictionary further explains that a conspiracy is, “an agreement between two or more persons to commit an unlawful act or to accomplish a lawful end by unlawful means.” http://www.merriam-webster.com/dictionary/conspiracy

The same dictionary defines the word, “theory” as; the analysis of a set of facts in their relationship to one another; an abstract thought or speculation, and an ideal or hypothetical set of facts, principles, or circumstances – often used in the phrase, “in theory.”

So, if someone can backup a pronouncement with facts, statistics, recorded or documented statements, quotes, etc, the statement is no longer a “theory” even though the conclusion may on the surface seem like a stretch. 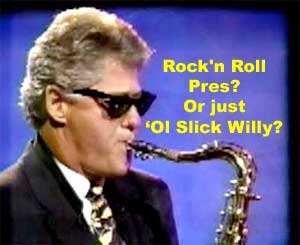 Were these rare moments of truth from former president Clinton?

"I did attempt to find out if there were any secret government documents that revealed things. If there were, they were concealed from me too. And if there were, well I wouldn't be the first American president that underlings have lied to, or that career bureaucrats have waited out. But there may be some career person sitting around somewhere, hiding these dark secrets, even from elected presidents. But if so, they successfully eluded me…and I'm almost embarrassed to tell you I did (chuckling) try to find out." –

"Sarah, there’s a government inside the government, and I don’t control it."

Bill Clinton – As quoted by senior White House reporter Sarah McClendon in reply to why he wasn’t doing anything about UFO disclosure.

Here's how NOT to talk about these things!

Tim Swartz and I explore the background of some of the hidden agenda and secret government stories and update some of the material. Although Tim Swartz is with us for the full two hours, we just scratch the surface. Hopefully, you will hear things that will inspire YOU to start to do your own research, outside the main stream media’s presentation of “reality” and come to your own conclusions.

Far Out Radio with Scott Teeters is broadcast Live from 7-9pm Eastern Time and 4pm to 6pm Pacific Time.

We invite you to search the topics of shows box to the right to listen to and download our archived shows as mp3s anytime you like!!