Teleportation How To From Star Trek to Tesla 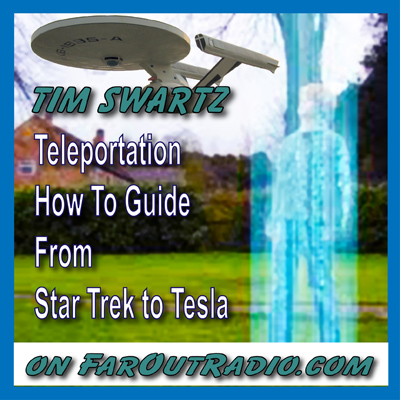 Today's Scientific Data that Supports the Reality of a Tele Transporter.

Listen HR 1 HERE. HR 2.  Our friend Tim Swartz, Investigative Reporter and Author of many  intriguing books is back with us this program to place lots of light on the scientific reality of teleportion with details from his amazing book, Teleportation How To Guide: From Star Trek to Tesla.

The well-known phrase, "Beam me up, Scotty," from the popular television series STAR TREK first introduced the public to the idea of teleportation — instantaneous transport through time and space — although the term was probably originally coined by the world famous author of books on unexplained mysteries, the late Charles Fort.

Long thought to be the work of over imaginative writers, teleportation is a reality that science has taken beyond the void of pure speculation and into the realm of 21st Century technology.

Could it be that extraterrestrials have been trying to feed us clues regarding the existence of this interstellar mode of transport which will enable us to instantly maneuver between two points in the twinkle of an eye?

We also look at information from the Lost Journals of Nikola Tesla revealing what the great mind of all time knew about teleportation and how he helped institute this process as part of the Top Secret Philadelphia Experiment.

This will be another doozie of a program. Keep the lights on.

Tim R. Swartz is an Indiana native and Emmy-Award winning television producer/videographer, and is the author of a number of popular books including The Lost Journals of Nikola Tesla, Secret Black Projects, Evil Agenda of the Secret Government, Time Travel: A How-To-Guide, Richard Shaver-Reality of the Inner Earth, Admiral Byrd's Secret Journey Beyond the Poles, and is a contributing writer for the books, Sir Arthur Conan Doyle: The First Ghostbuster, and Brad Steiger's Real Monsters, Gruesome Critters, and Beasts from the Darkside.

You may peruse Tim Swartz's books on Amazon HERE.