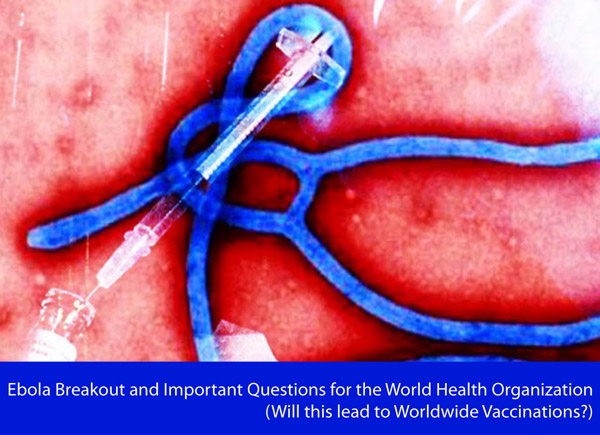 The World Health Organization is claiming that we are facing the most severe health crisis ever with the alleged Ebola outbreak in West Africa.

But since the WHO was caught inflating the Swine Flu pandemic to hoist experimental vaccines on the world, perhaps we should not just take them on their word without demanding evidence.

Here are 10 questions for the World Health Organization to answer about the Ebola outbreak in Africa:

1. You include "probable and suspected" cases of Ebola in your official African figures; what methods do you use to determine suspects and probables?

2. What is the exact number of "confirmed" cases of Ebola (minus the probable and suspected cases)?

3. What method was used for confirming that Ebola was indeed the cause of death in those cases, and what organization made that determination and gathered that data?

4. Can you provide a full list of all WHO-approved vaccination programs for West Africa conducted in the year leading up to the Ebola crisis?

5. Can you provide a full list of the genetically modified (GMO) mosquito experiments for presumptive treatment of dengue and malaria that are being conducted in the Ebola-stricken regions? Reviewing the effects of these experiments might be of value to the blind participants.

6. How many of the confirmed Ebola victims received vaccines or any other treatment from the Western NGOs (i.e. Red Cross, Doctors Without Borders) in the months leading up to their Ebola illness?

7. Do you have public water samples from Ebola regions to rule out contamination? Please show them to us.

8. West Africa has one of the lowest life-expectancy rates in the world at around 55 years. Does that compromised health environment lead to higher mortality rates for this supposed strain of Ebola?

9. How many of the alleged African Ebola victims also had compromised immune systems due to HIV/AIDS, the number one cause of death in the region?

10. Why are health workers wearing hazmat suits if Ebola is merely infectious like AIDS, when Tuberculosis, a highly contagious airborne disease, doesn't even require hazmat suits? It's a bit theatrical, don't you think? And why isn't it working to stop transmission to medical professionals?